Need help getting started with DTS?
Locked
1 post • Page 1 of 1

Easy Installation
Installing the Domino could not be any easier. The only tools necessary to get started are a screwdriver and a laptop computer! In fact, the average person can have the Domino installed and make the first modifications to the factory tune in less than an hour.

If for whatever reason you decide to remove your Domino, doing so is easy as well. Installation is completely reversible as our kit requires no permanent modifications to your car. 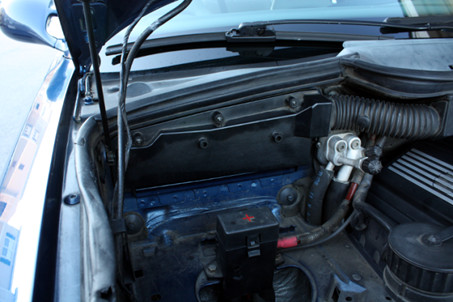 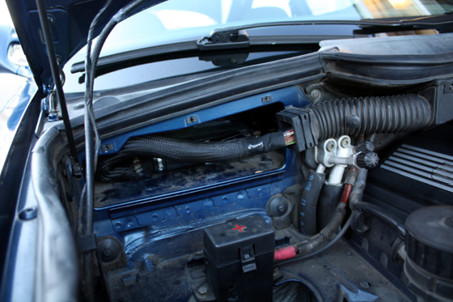 Next, carefully reach into the DME compartment and grasp each side of the DME. In cars with an automatic transmission, the DME will be the ECU on the bottom when looking into the compartment. Using a fair amount of effort, it should be possible to slide it out from the compartment as shown. 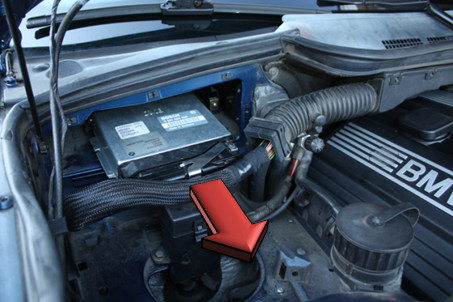 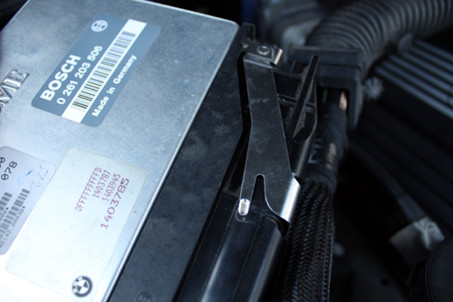 Before unplugging the DME from the engine wiring harness, verify that the sticker on the DME appears similar to one of the three shown in the images below. Pay special attention to the last three digits of the Bosch part number (i.e. 413 or 506). This product only works with 413 or 506 hardware. 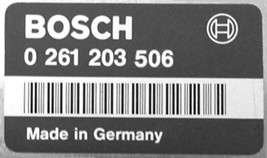 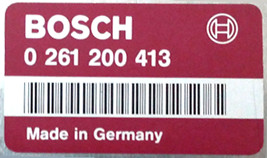 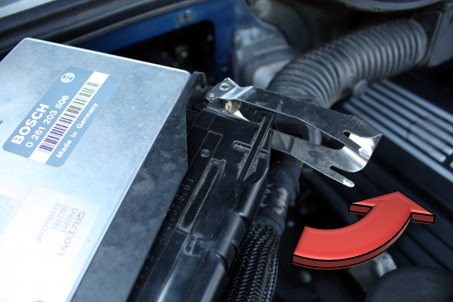 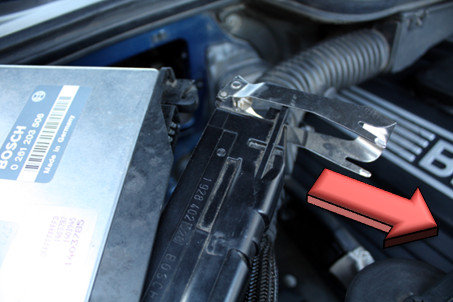 Installing the Domino
After the DME has been removed from the wiring harness, the installation of the hardware can begin. Start by turning the DME upside and locating the six tabs around the perimeter which secure the cover to the base. These tabs need to be bent upward using a flat blade screwdriver. Be careful not to bend them more than necessary as this will weaken them and possibly cause them to break. It is not necessary to remove any of the bolts or screws that are visible. 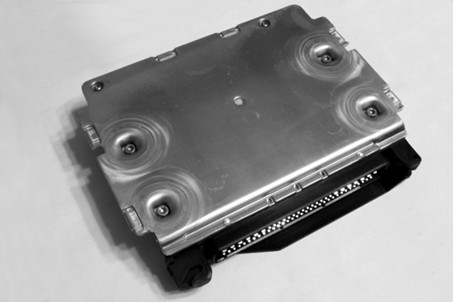 After all six tabs have been bent upward, remove the DME cover to reveal the internal electronics as shown. Locate the EEPROM near one edge of the DME. It will have a small white clip securing it to the circuit board. Before touching the circuit board (or any internal components), be sure necessary precautions have been taken to discharge any static buildup by touching a strong ground source. Next, remove the white clip. The EEPROM can then carefully be removed using a small flat blade screwdriver. Start by gently prying up one side of the EERPOM and then follow with the opposite side as shown in the images. This is to ensure the pins will not be accidentally bent. If done correctly, the original EEPROM will be undamaged. 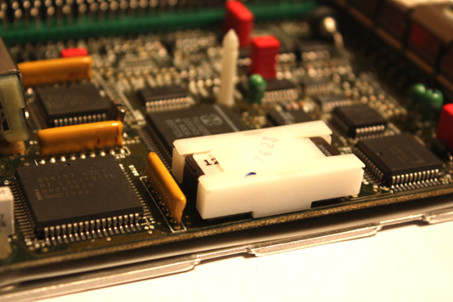 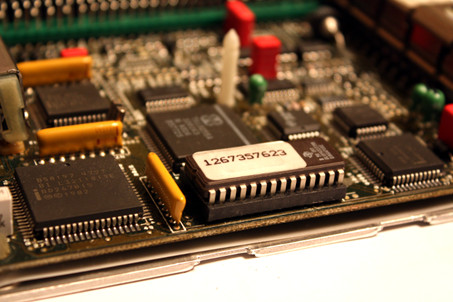 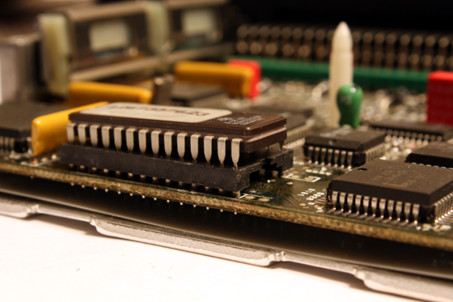 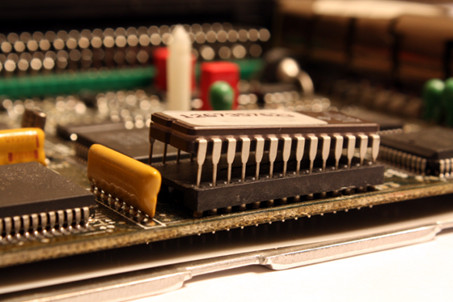 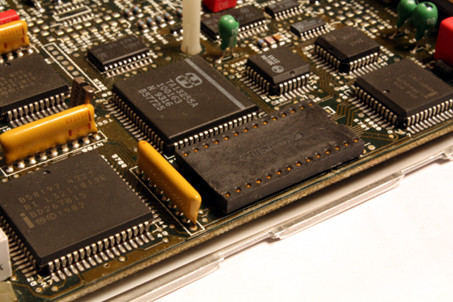 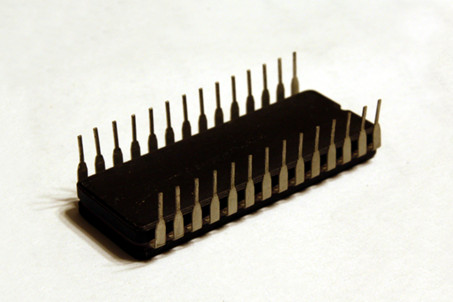 Once the EEPROM has been removed from the DME, take special notice of the notch at one end of the EEPROM socket on the circuit board. This small notch (shown in the image below) signifies the correct orientation of the Domino which is installed next.

Next, install the Domino as shown below. Look for the white stripe and align this with the notch on the EEPROM socket. Also note the row of holes which are near the top edge of the Domino. Notice how the holes near the bottom are slightly offset from the edge. Proper orientation is extremely important as the DME will not operate correctly otherwise. Press the Domino firmly down into the EEPROM socket. 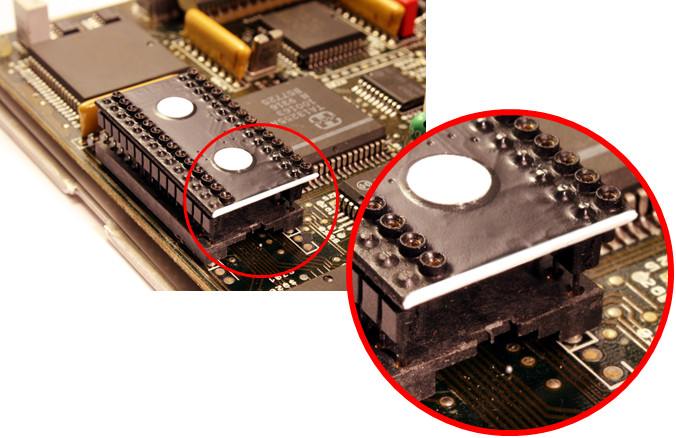 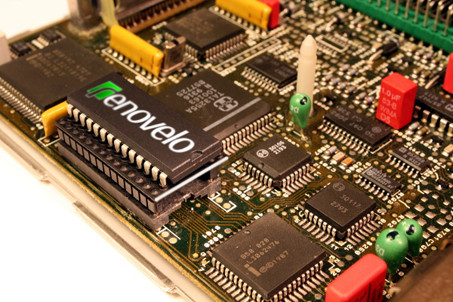 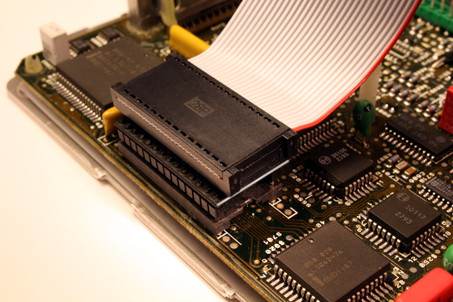 Return to “Getting Started”